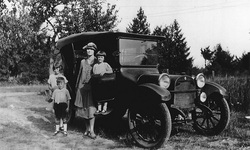 During the 1920’s life was pretty carefree and more like a party type of life style. The reason for this was because during the 1920’s America was the “wealthiest country in the world with no obvious rival” (HistoryLearningSite.co.uk). At this point new inventions were being created to make what were once very tedious jobs that probably took hours to do were now able to be done much quick and easier. Examples being house appliances, “off-the-racket clothing” and supermarkets too made it much easier for people to get things done quicker (ushistory.org). Buying all these things was also very easy since in the Roaring Twenties stores allowed their customers to buy things on credit if they didn’t have the money to pay up front. “Buy Now, Pay Later” became the credo of many middle class Americans of the Roaring Twenties” (ushistory.org) With easy credit being available to everyone anyone no matter who was able to get big loans for any type of thing like a house, automobile, or if a farmer a farm. Unfortunantly there are consequences for this, “Greater credit availability makes the economy more sensitive to any shocks according to a recent study by Raghuram Rajan at the University of Chicago and Rodney Ramcharan of the Federal Reserve Board” (Business Insider). Now this is all known but during the 1920 they had no idea that they were basically setting themselves up for a really big disaster. At this point they were all so peacefully oblivious to what was really happening. For one by paying on credit they were essentially paying way more then what the item was really worth. People were only really thinking of that moment in time not the lasting consequences that were sure to come from their decision. “In the 1920’s it just seemed to be the case that if you wanted something then you got it” (HistoryLearningSite.co.uk). But it’s not all the consumer’s fault; it was also in part to advertising. As more inventors created more things used advertising to make it more appealing to costumers, stores would do this by lowering the prices thinking that the lower the price the more likely people would buy it and the more profit they would get from it. Along with lowering the prices the inventors would raise their own payment so that they could keep up with the competition (1920-30’s.com). For some time it seem to work and amazingly they were able to make a profit and boosted the economy through that time. Everything seemed to be going well for those that were close to the production, not so much the farmers or any in the rural areas. Soon the time of great wealth was brought down “From one extreme to the other –Boom to Bust. The magical prosperity vanished almost overnight as people lost confidence following the 1929 Stock Market Crash,” (1920-30’s.com). People of the 1920’s had not planned ahead in case of emergencies and easily got themselves into debt. Once they realized that they had got way over their heads with their careless spending.